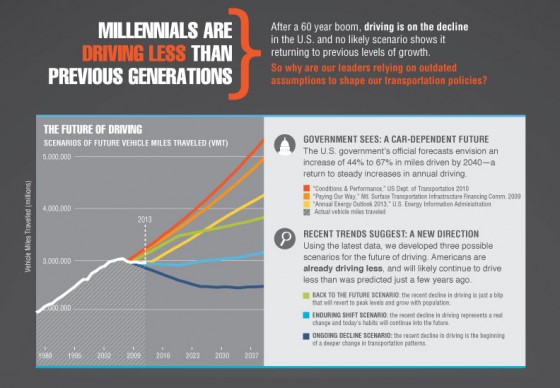 The actual headlines based on a new U.S. PIRG study, “New Direction: Our Changing Relationship with Driving and the Implications for America’s Future” actually state how Millennials are leading the trend to driving less. But really, it’s not about what they don’t want that’s more interesting, it’s about what they do want: walkable communities.

However, viewing the chart above, it’s clear that it’s going to take a bit more than demand to shift the supply of lobbying and government investment to reflect that.

The study’s key findings:
– Americans drove more miles nearly every year between the end of World War II and 2004. By the end of this period, the average American was driving 85 percent more miles each year than in 1970. Today, Americans drive no more miles in total than in 2004, and no more per person than in 1996.
– Americans took nearly 10% more trips via public transportation in 2011 than in 2005. The nation also saw increases in commuting by bike and on foot.
– A return to the steady growth in per-capita driving is unlikely given the aging of the Baby Boom generation, the projected continuation of high gas prices, anticipated reductions in the percentage of Americans in the labor force, and the peaking of demand for vehicles and driver’s licenses and the amount of time Americans are willing to spend in travel.

Now, about those Millennials, now the largest generation in the U.S.:
– Young people aged 16 to 34 drove 23% fewer miles on average in 2009 than they did in 2001—a greater decline in driving than any other age group. The severe economic recession was likely responsible for some of the decline, but not all.
– Millennials are more likely to want to live in urban and walkable neigh­borhoods and are more open to non-driving forms of transportation than older Americans. They are also the first generation to fully embrace mobile Internet-connected technolo­gies.

Then there are the benefits:
– Traffic congestion has fallen. According to data from the Texas Transportation Institute, Americans spent 421 million fewer hours stuck in traffic in 2011 than they did in 2005.
– America is less dependent on oil. In 2011, gasoline consumption for trans­portation hit a 10-year low.
– Reduced vehicle travel (par­ticularly in large trucks) reduces the wear and tear on our nation’s roads, reducing maintenance needs.

Use the handy graphic below to communicate these findings. See a list of policy recommendations by the publishers of the report at the bottom of their summary here. Download the report here.