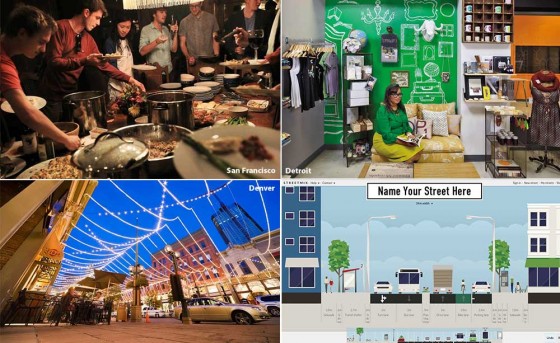 Let’s try something different in this post. Because I can’t find something like this, here is a condensed one-page collection of recent (and recently found) articles and resources on what is making our cities and neighborhoods more vibrant, creative and community-driven. It seems the predominant trend is involving young people in shaping cities.

Attainably-Priced Housing
Housing available for Zappos workers remains scarce – Tech-oriented companies (yes, Zappos) are seeking downtowns because that’s where their employees want to be. Yet where is the housing? Zappos’ CEO is contributing $100 million to help solve it.
Housing has to be cheaper for Downtown [Vegas] to be fully realized – In a related article, it’s pointed out that not only do employees want housing in the downtown, but that it needs to be truly affordable if the company wants their workers to be truly happy.

Venues
How theaters can catalyze growth – For every person that has a historic theater in their community (and who doesn’t) that they feel is a neighborhood institution waiting to be reborn.

Crowdfunding
Crowdfunders Eye Commercial Real Estate – Led by Fundrise, this industry is set to explode in 2014. It’s about time what we build isn’t reflective of the institutional investors that fund 90% of it today.

Millennials
The Passion of Young Cleveland – What’s it look like when young people start to turn wishful thinking into action?
How a Young Community of Entrepreneurs is Rebuilding Detroit – Profiles the kind of people that a city needs to reinvent itself and thrive.
Downtowns: What’s Behind America’s Most Surprising Real Estate Boom – The answer is? You guessed it.

Creative Cities
Tech entrepreneurs revive communal living – A fast-growing trend combining coworking and attainably-priced housing in one.
75 Seriously Fun Ways to Make Your Town More Playful – Title says it all. Many of these things can be done quickly and cheaply, others not to much, but make a profound impact in establishing a community identity.
The Latest Plan to Save Detroit: Build a Gay Neighborhood – For anyone who knows Richard Florida’s creative class research: gay neighborhoods = economic growth.

Gentrification/Equity
Are Our Greatest Cities Destroying Their Greatest Assets? – The perils of gentrification, where informal creative hangouts are prime targets for Class A office space.
Creating Hipsturbia – A look at how baby boomer hipsters are gentrifying young hipsters out of the coolest neighborhoods.
Where will all the Hipsters go? – A response to the above article stating that the real problem is that there just aren’t enough walkable neighborhoods being built.
Why It’s So Incredibly Difficult to Fight Urban Inequality – Creative class economist Richard Florida’s take on what is needed, mentioning Promise Zones.

Governance
Shaping Civic Intrapreneurs – If the public sector is going to be involved in revitalizing your downtown, here’s a great primer on innovation training.

Rankings
10 Smartest Cities – TLDR: In other words, the cities with the citizens that are most prepared to define their own future: In order, Seattle, Boston, San Francisco, Washington DC, New York, Toronto, Vancouver, Portland, Chicago, Montreal.

Tools/Visualizing Data
Visualizing healthy communities geographically – This is how every city’s demographic data should be presented.
12 Fresh Ideas for Transforming the Places We Live With Open Data – If that wasn’t enough, here are twelve more.
Street Mix – Do-it-yourself street design, and a very cool tool at that.
This amazing 3D tool might transform street planning – This is a must-see, with sidewalk and road widths that can be transformed in real time.