Since this blog’s first articles in 2003, the vision has been about placemaking for the knowledge economy – see 80 entries on the subject here. In June 2014, the Brookings Institution released a study, ‘Rise of the Innovation Districts‘, that officially recognizes this as a movement and provides a significant amount of research behind it. Here is their definition of what an innovation district is:

It even goes on to say, “The rise of innovation districts seem perfectly aligned with the disruptive dynamics of our era: “crowd sourced rather than close sourced, entrepreneurial rather than bureaucratic, networked rather than hierarchical.” 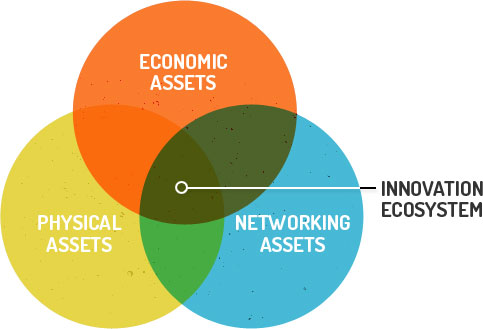 For the an overview of a few innovation districts, go here to learn about what’s happening in Cambridge, St. Louis, Detroit, Philadelphia, Seattle, Raleigh-Durham and Boston, and here for the full report/pdf. Innovation districts can be explained in its simplest form as the intersection of three components:
– Physical Assets: The built environment, primarily as Smart Growth.
– Networking Assets: The elements by which people connect with one another, formally (strong ties) and informally (weak ties). This is where crowdsourced placemaking fits in.
– Economic Assets: The drivers (the companies), the cultivators (i.e. entrepreneurial support), and neighborhood-building amenities (the businesses that enable downtown vibrancy, like main streets).

While innovation districts typically happen either as anchored (e.g. university) development, re-imagined urban areas or urbanized office parks, the consensus among those directly involved in developing innovation districts is that any city, large or small, has the potential to cultivate one.

The bottom line is, if you’re looking to make an impact in your city, find or initiate a crowdsourced placemaking program around creating an innovation district! Follow the conversation on Twitter at #innovationdistricts and stay tuned for a more formal discussion and networking group.