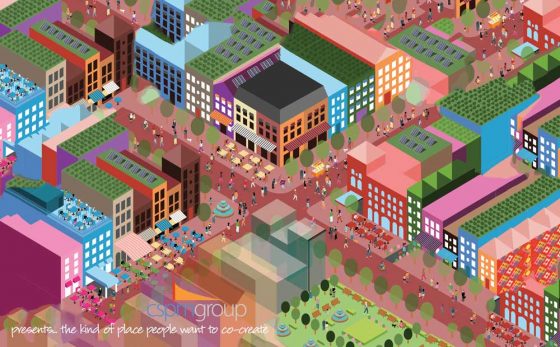 Why hasn’t there been mass community ownership in real estate development before?
While practically anyone can participate in the stock market, the vast majority of real estate investment was accessible only to accredited investors: those with a net worth of at least $1M excluding one’s primary home, or income of at least $200K income/$300K combined if married. The SEC (Securities Exchange Commission) is said to legislate this to ‘protect’ ‘uneducated’ consumers from losing more than they ‘should’ afford to, specifically targeting real estate because of the larger investment amounts. At the same time, real estate is often regarded as the safest and most effective investment vehicle for growing one’s net worth.

What is making mass community ownership in real estate development possible today?
The information age has allowed people to self-educate and peer-regulate transactions, which is why so many of us trust ride sharing in strangers’ cars (Uber) and staying in strangers’ homes (Airbnb), unleashing an unprecedented wave of in innovation in these two sectors alone. This is a primary reason why Congress passed the JOBS Act in 2012, to unleash innovation in real estate by legalizing crowdfunding, opening a massive door for community ownership. Digitizing transactions also allows real estate transactions to be ‘fractionalized’ into much smaller amounts, removing that risk of ‘losing too much’.

What about REITs, community land trusts, mortgages, co-ops and co-housing?
Neither REITs (real estate investment trusts), community land trusts or mortgages allow a community to co-invest in a specific property in a neighborhood. Residential co-ops and co-housing are exclusive only to the residents who live there, closed to anyone else even if they want to contribute or even donate. Mass community ownership, or fractionalized ownership, is about allowing anyone with shared values to invest and thus have ownership in any property welcoming such contribution.

How does community ownership in real estate development work?
Community ownership is accessible through what is known as ‘fractional ownership’, splitting ownership of a private physical asset (ie real estate) into shares as little as $100 among dozens, hundreds or even thousands of owners. To avoid a massive amount of paperwork and processing, the entire system is digitized.

What are the primary benefits of ‘fractional’ community ownership?
Anyone could own a share of a real estate development for as little as $100. Empowering a neighborhood to own its own assets also brings liquidity (readily converted into cash) to development. Liquidity allows people the freedom to buy and sell shares based on personal and community need, without being locked into a deed that requires a significant amount of time, effort and expense to alter. To summarize, fractionalization locks up the capital, but not the investor.

How can individuals buy these shares to invest in their community?
There are a number of platforms that allow this. One of the first is Small Change, which is the only platform allowing unaccredited investors (anyone over 18) to equity invest directly into specific social impact real estate projects (up to $5 million). Offerings on the Small Change platform must score at least 60% on its impact index to be listed, ensuring investments add more value to the neighborhood than they extract. Another platform is Rise Markets [current status unclear] which brings liquidity to real estate development and allows unaccredited investors to own shares in a single property or portfolio of properties based on building, location, developer, building type or any other listed variable.

How can one know which investments are trustworthy, and/or good investments?
Small Change has a robust due diligence process to vet the viability of a project within compliance standards of the JOBS Act. Entities that you trust, like a local nonprofit, can put together their own ‘playlists’ of vetted, recommended investments on these platforms. Or you can invest based on where your trusted peers are putting their money. The community will also rate the developers they most trust.

I hear the terms blockchain, tokenization and cryptocurrency associated with digitization of assets. How are these related?
Blockchain is a widespread technology that provides a transparent democratized system for transactions that is being used from food safety to medical record keeping to digital voting. Cryptocurrency was one of the first and most famous applications (e.g. Bitcoin) to use blockchain technology, and tokenization is the term used to describe fractionalization using the blockchain (see video below). Tokenization can also be viewed as a more advanced form of encryption that makes fractional ownership safe. Small Change doesn’t use blockchain or tokenization, yet, while the Rise Markets vision is based on it.

How can I become a part of this movement?
A group of leading practitioners is seeking a real estate developer that is willing to fractionalize their project in partnership with a community co-creation process as a live national case study. See here for an outline and reach out to contact@cspmgroup.com to be a part of the program.