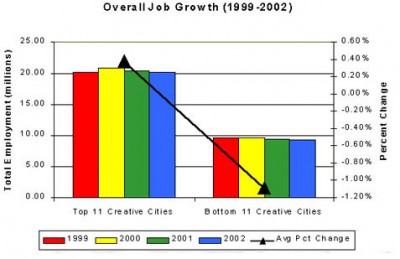 For anyone who doesn’t know Richard Florida, author of The Rise of the Creative Class, it is his market and economic research that largely qualifies signficant investment in CoolTowns.

Since being published in 2002 (with its sequel, The Flight of the Creative Class due in 2005), his work has helped either validate or inspire the creative mindsets of the mayors of Austin and Denver, the governor of Michigan, and the CEO of Hewlett-Packard, to name a few, to strongly support CoolTown-oriented environments.

Not surprisingly, his work has garnered criticism from the suburban, industrial-age, squelchers* that are resistant to change. Finally, here’s his response, which I’ll refer to as Rise of the Creative Class II, as good as a brief modern economic impact analysis can be. The biggest criticism was that the creative class was nothing more than a dot com boom gone bust. The post-dot-com graph above should put that to rest (unless you’re one of Florida’s staunch critics.)

*My hero (Richard’s as well), Jane Jacobs, defines squelchers as “those political, business, and civic leaders that divert human creative energy by posing roadblocks and saying “no” to new ideas.”