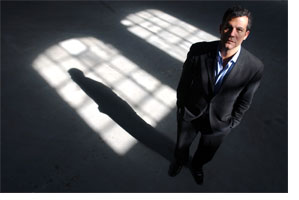 You may notice the term ‘creative class‘ pop up here and there, with a category on this website covering it. I first mentioned Richard Florida – the person who coined and legitimized the term – way back in April 2003, so it’s time for a re-introduction, especially since the creative class best defines the market most attracted to ‘cooltowns’.

Richard is an economist and the author of the best-seller Rise of the Creative Class and its sequel Flight of the Creative Class. The first book focused on how creatives drive the economy and that ‘place’ matters more than ‘jobs’ to them. The latter book focuses on how other countries, aka Global Austins, are using this to their advantage.

He’s currently the Hirst Professor at George Mason University’s School of Public Policy and featured in this month’s Fast Company magazine, which by the way, is as close to being the official magazine of the creative class as any other. You can also listen to a podcast of his popular presentations.

Tomorrow, his list for the 15 Hottest Cities for Creative Types.