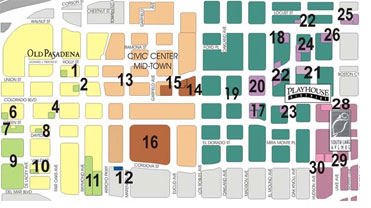 Look at all those downtown development projects – who needs a study to prove people are moving downtown?

There’s something in the water in Pasadena. They have one of the most successful new pedestrian malls in the country. They have one of the most progressive new urban villages in the country. 85% of all building permits are going downtown, totaling 2500 new homes. So I guess when the City’s Central District Specific Plan won a coveted annual Smart Growth Achievement Award, perhaps it was rather anti-climactic.

Improved safety, proximity to jobs, popular entertainment and dining, distinct character – lots of reasons for the demand to live in downtown Pasadena. The City is making sure however, that the supply keeps up, with the following codes:

– Maximums of 1.75 parking spaces per multi-family residential where other areas have minimums of 2.0. Office parking ratios are 25% less than in other areas.

– Densities, measured by floor area ratio, are 20% to 200% greater than other areas in the city. Up to 87 dwelling units per acre are allowed.