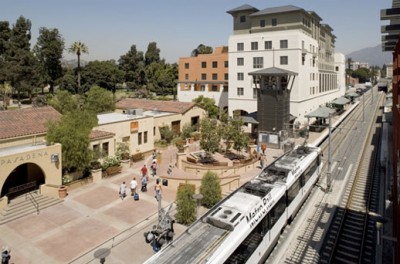 Way back in November 2005 we published the projected vision of the new Del Mar Station Transit Village in Pasadena. Well, it’s time to show you the built result, and it’s inspiring to see it not only match the rendering, but look even better.

The 4.2 acre development hosts 346 apartments (though only 21 are affordable), 20,000 s.f. of retail, and 1200 underground parking spaces (ironically, more than three times the number of living units). 600 of those spaces are for the residents at 1.75 spaces/unit (this is California, remember), and the other 600 for commuters.

The civic plaza (top image) is the centerpiece, fronting a restored Spanish Revival-style train station now serving as a retail destination. The city’s historic downtown is a 5-minute walk, and across the street lies a park designed by Frederick Olmstead, a legendary landscape architect from the early 20th century.

Notice (or not notice, actually) the creative massing of the 100 unit/acre development, which hides the seven-story apartment buildings by setting them back behind four-story buildings and placing the plaza in front of the one-story historic train station to allow for a much more human-scale at the street level. The architecture also reflects the distinct historic styles: industrial loft, modern commercial, Mediterranean revival, craftsman, and moderne residential.