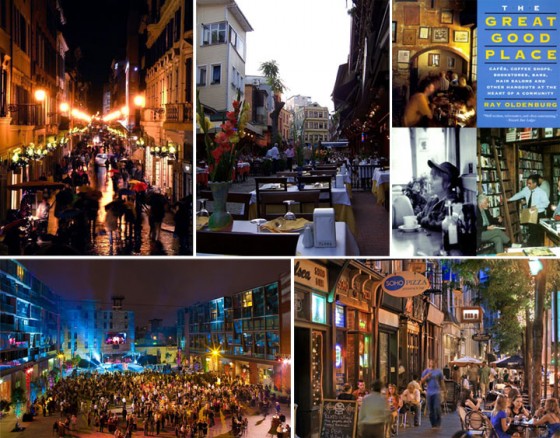 By popular request, here are what I feel are the top 20 articles among the 1600 on this site, influenced by current times. This will be constantly changing, especially as I rediscover previous articles and post new ones (in bold)…

The economic foundation…
How the triple-bottom-line will save a town’s economy – A visual showing the invaluable role triple-bottom-line creatives play in shaping their own economy.
Creatives ahead of the financial crisis – How the preferences of creatives, and not so big homes, are better suited to a sustainable economy.
The evolution of economic eras and placemaking – A table that illustrates our evolution from an industrial to a knowledge economy.

The development model…
What is triple-bottom-line real estate development? – Defining the economic, social and environmental criteria/benefits.
Moving the tipping point for creative places – Illustrating when institutional investment capital will shift to human-scaled buildings.
Why placemaking isn’t crowdsourced… yet – How the management model needs to change in real estate first.
19 urban development types for creatives – The real estate development models that institutions will invest in.
The economy-building building – How developing buildings for creatives is beneficial to both the local and national economy in multiple ways.
â€˜Americans are moving on up to smaller, smarter homes’ – A positive evolution from a key cause of the housing crisis.

Recently in the Top 20
â€˜How the Crash Will Reshape America’ – Richard Florida’s analysis of the long overdue new economy to emerge from the financial crisis.
Paris launches world’s largest bike sharing system – No bike sharing system in the world comes close.
The outdoor cafe plaza – The ultimate placemaking destination for creatives.
The creative industries, GDP and happiness, supported by How the creative class relates to the economy – Charts illustrating how the creative industries positively correlate to GDP and happiness.
Digital infrastructure replacing an asphalt one – The physical environment to accommodate modern needs.
Happiness best reflected by the beauty of place – Aesthetics matter to people more than anything.
The four different kinds of beta communities – The four kinds of projects beta communities can help generate.The Experience Economy – A better description of our modern economy than simply ‘the information age’ or ‘knowledge economy’.
Ten defining principles for a true green community – Benchmark principles and communities for zero carbon, zero waste communities.
The time is now to crowdsource the places you want – Get started now.
The ‘postcard test’ – A litmus test for a place’s aesthetics, beauty.
Affordability’s secret weapon – the ‘ipad’ – A stylish 380 s.f. one-bedroom in the UK.