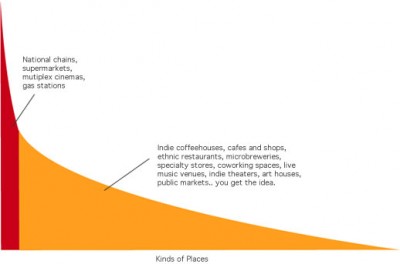 When it comes to understanding the fundamental economic difference the Internet provides over the non-digital age, it’s having access to the Long Tail, which is essentially anything and everything else that’s a ‘non-hit’ or ‘non-blockbuster’, but in sum is greater. You can learn more about the Long Tail in our previous four-part series.

Chris Anderson, author of The Long Tail: Why the Future of Business is Selling Less of More, sums up cities pretty nicely in terms of the Long Tail,

Note in the graph above, representing the mindset of creatives, that different kinds of places are listed from most popular to least popular, left to right. Of course, collectively, chains are the most popular venues in the U.S., shown in red, which dominate the suburban landscape. However, once you enter cities, you’ll see less of these chains and more diversity, the Long Tail, as represented in the color orange. If this were the standard population, the line delineating red from orange would be much further to the right.

He goes on to quote Jane Jacobs, often the de facto spokesperson for cities:

Cities, however, are the natural home of supermarkets and standard movie houses plus delicatessens, Viennese bakeries, foreign groceries, art movies, and so on, all of which can be found co-existing, the standard with the strange, the large with the small. Wherever lively and popular parts of cities are found, the small much outnumber the large.“