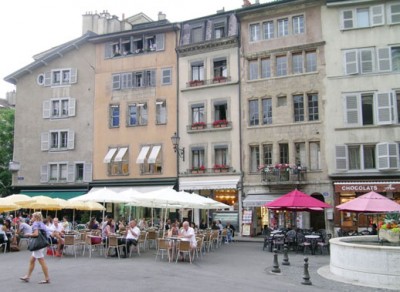 Geneva, Switzerland, central to United Nations relations (ie known as the ‘Peace Capital’, site of the Geneva Convention) ranked in a 2009 survey by Mercer as having the third-highest quality of life in the world, and referred to as the world’s most compact metropolis, which essentially means one of the most pedestrian-oriented. It is also extremely diverse because of its international affairs.

Geneva’s most pedestrian-oriented area by far, not surprisingly, is its historic district, known as Old Town, located on a hillside fronting Lake Geneva and its famous 459 foot lake fountain/water jet, Jet d’Eau. The photo above shows one of the countless outdoor dining areas, a very common scene throughout the entire city. In fact, the first thing you walk into when leaving the train station is an outdoor dining scene.

Notice also the human-proportioned buildings and windows, which play a large role in providing a sense of comfort for people.