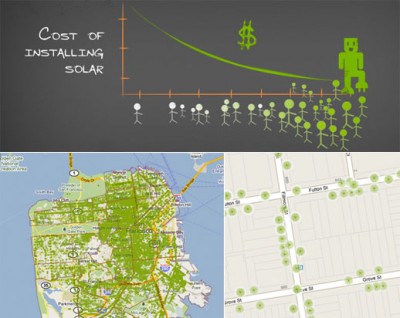 Wouldn’t cities be a lot greener (literally and figuratively) with more trees and solar energy? Those are two very big ticket items, and exactly the kind of scope where purpose-driven collaborative crowdsourcing is most effective.

One Block Off the Grid tackles the solar energy Catch 22 where solar panels are too expensive to install for one home, and significantly more affordable only if produced for hundreds. They aggregate interested buyers. Notice the chart above is a long tail diagram, which represents the kind of following this site has (the emerging crowd increasingly wants more walkable communities, yet the ‘big head’ in charge only knows how to develop auto-oriented communities). This same approach can be applied to telling local developers/investors what kind of more attainably-priced housing they should build – Renaissance Downtowns is one such developer.

What about trees? The Urban Forest Map (initially only in San Francisco) lays out the first step by letting the crowd inventory all the trees in the entire city, then calculating the collective dollar savings through the number of gallons of stormwater filtered, pounds of air pollutants captured, kilowatt-hours of energy conserved and tons of carbon dioxide removed. While it’s not yet part of the program, this then provides the opportunity to allow the crowd to either aggregate demand or put their money where their collective energies and wallets are and simply crowdfund new trees in their neighborhood. If not the added physiological benefit, isn’t it worth at least the increase in property value?!

Good idea? If so, how would you participate in such crowdsourced programs?