We’re reaching the tipping point where our investment and tax dollars are going to start benefitting our local economies rather than private investors, with the ‘Long Tail‘ leading the way. Crowdfunding, a natural extension of crowdsourcing, emerges from the Long Tail and is coming to small businesses. It’s about time!

Cities are wising up in prioritize investing in independent businesses districts over chains. According to a BusinessWeek article, subsidies for chains are not effective. Big box chain retailers are known to have been costing tax payers anywhere between $1.4 to $7.2 million to finance their development. A recent economic study shows that cities and counties in the St. Louis region diverted more than $5.8 billion in public tax dollars to finance private development, more than 80% supporting the construction of new chain stores and shopping centers, yet resulting in virtually no economic growth… but with 600 small retailers closing.

You know something’s brewing when even the big fish are investing in the little ones. Fortune 500s like American Express and Google, as well as Facebook and Twitter are supporting indie businesses via Small Business Saturday on November 27. American Express even sponsored the “first national, longitudinal study of market share trends for independent businesses”, reporting that independent businesses draw nearly half of all retail shopping business and 64% of eating and drinking business. See chart above from the study. Amex also publishes myriad articles on new small business trends, like this article on locavesting.

On the indie side of national promotions, at long last there’s a professional-looking campaign supporting local retail businesses at Shift Your Shopping.

Meanwhile, there’s a buzz in the indie retail industry around articles like “How Yelp is Killing Chain Businesses”, in the Washington Post. The study says a one-star increase in Yelp rating leads to a 5-9% increase in revenue for independent restaurants, none for chains, which also adds that national chains have declined in market share at the same time.

So, the question then becomes, what is the underlying reason behind this groundbreaking shift? It’s all about the rise of the ‘Long Tail’, explained in the previous entry, “â€˜Big Head’ and â€˜Long Tail’ both key to placemaking”, simultaneously being embraced by the ‘Big Head’ such as city governments and the aforementioned corporations. 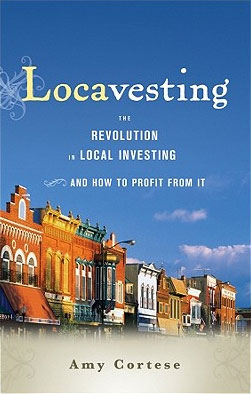 Finally, what will really help this movement take off? Crowdfunding. Check out the new book, “Locavesting: The Revolution in Local Investing and How to Profit From It” from Amy Cortese, which covers this topic comprehensively. For more immediate gratification, read her NY Times op-ed, “Pennies From Many”: “For a glimpse of what is possible, look at Britain, where securities laws are helpful to crowdfunding and several start-ups are vying to be the Facebook of finance. The year-old Funding Circle, a business-lending site based in London, raises more than $2.3 million each month for small businesses from individuals who can invest as little as $30 and earn an average yield of roughly 7.3% after fees. Those are loans; two other start-ups are applying the model to equity shares in small companies… The Securities and Exchange Commission has been considering proposals to ease restrictions on crowdfunding. One petition, prepared in 2010 by the Sustainable Economies Law Center and, fittingly, paid for by a grass-roots crowdfunding effort, asks the S.E.C. to permit entrepreneurs to raise up to $100 per individual and an aggregate of up to $100,000 without requiring expensive registration and disclosure. President Obama, as part of his jobs act, advocates an exemption for sums totaling up to $1 million. Representative Patrick McHenry, a Republican from North Carolina, has drafted legislation that would allow companies to obtain up to $5 million from individuals through crowdfunded ventures, with a cap of $10,000 per investor, or 10% of their annual incomes, whichever is smaller.”

Crowdfunding small businesses is already taking off. The leading crowdfunding entity, Kickstarter, surpassed $100 million in pledges from over 1 million backers for over 23,000 projects in just two and a half years. Most of the pledges were in the $11-25 range, and 400,000 of those backers came in the last five months alone. Crowdfunding was frequently mentioned at the CityWorks(X)po conference launching the Small Cities Movement, and the first crowdsourced business (“Bare Bones opens to rave reviews, packed house”, see October 27, 2011 grand opening photo above) in a crowdsourced downtown just began crowdfunding.